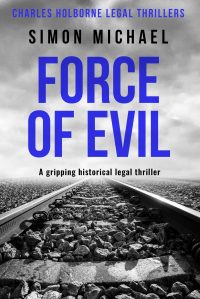 On the face of it, representing a widow in an accidental death case should be routine. Sergeant Maynard, an RAF policeman at Cardington Airbase, died in a simple motorcycle accident.

Only Mrs Maynard insists her husband was murdered and, although sceptical at first, as Charles delves further he starts to uncover something much bigger and more frightening happening at the RAF base.

As rifts in the corrupt Metropolitan Police are revealed, bodies pile up and the threats to Charles and those he loves escalate he begins to wonder: has he finally bitten off more than he can chew?

“Crime writing at its finest; not only unputdownable but unmissable”

“Force of Evil was even better than the previous books, if that is possible”